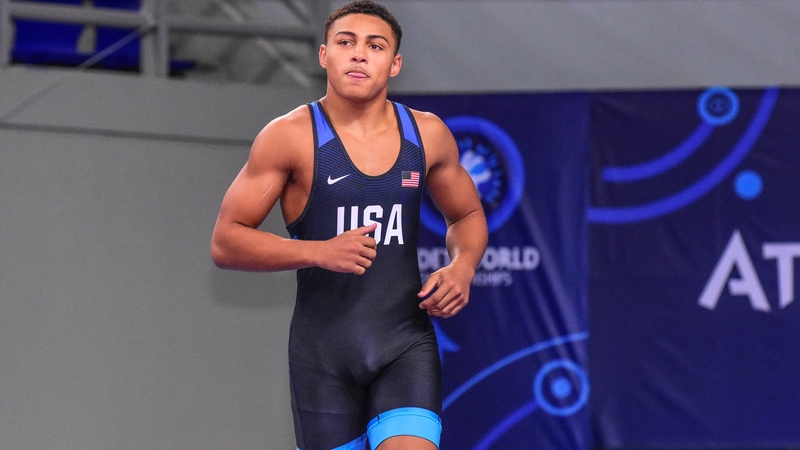 Good afternoon from Athens. The final day of the Cadet World Championships is here. The repechage is scheduled for 3:30 p.m. local time (8:30 a.m. ET) and there’s a slight schedule change after that. They’re going to roll straight into the medal matches rather than waiting until 5 p.m. We’re told Kurt McHenry should be up in the 46-kilogram gold medal bout around 4:20 p.m., followed by Jacori Teemer in the bout for bronze and title bouts for Aaron Brooks and Daniel Kerkvliet.

3:45 p.m.: The United States is going to need every point it can muster today in the team race battle with Russia. Robert Howard got the Americans out to a good start with an 8-0 repechage win against Tajikistan's Damirbek Maqsudov. Howard needs another victory to get into the bronze medal bout. He'll face Ukraine's Vladyslav Ostapenko.

3:55 p.m.: Tack on six points for Russia in the team standings. Russian Imam Ganishov reached the 54-kilogram bronze medal bout with a 10-0 tech against Madalin Baranga of Romania.

4:02 p.m.: Robert Howard's tournament has come to an end with an 11-0 defeat against Ukraine's Vladyslav Ostapenko. Here's how goofy the scoring system is: Howard finished 13th at 54 kilograms. Tajikistan's Damirbek Maqusudov placed eighth after getting beat by Howard 8-0 in his final match of the tournament.

5:15 p.m.: Kurt McHenry is a two-time Cadet World champion. The Virginia native went up 6-0 at the break on three first-period takedowns and tacked another takedown before things got interesting in the final minute against Georgia's Giorgi Gegelashvili. The Georgian scored a takedown and turn before McHenry added two more scores to win a 12-4 decision.

5:49 p.m.: Jacori Teemer will leave Athens with bronze. The New York native locked up a cradle and pinned South Africa's Francois Rossouw in 1:36 at 63 kilograms.

6:22 p.m.: Aaron Brooks went from Cadet World Team Trials runner-up to Cadet World champ in the same summer. The Maryland native defeated Russia's Arsamag Khostikoev 13-8 in the gold medal bout at 76 kilograms. Brooks used a four-point toss on the edge and another point for a lost Russia challenge to go up 5-0 early and built his lead to 12-3 at one point before Khostikoev staged a late comeback.

6:40 p.m.: Minnesota continues to rule the Cadet world at 100 kilograms. Daniel Kerkvliet followed up Gable Steveson's two golds with one of his own, defeating Russia's Ismail-Bek Nirov 2-1. Kerkvliet picked up a pair of clock points, while Nirov scored one on a step out.

7:10 p.m.: The United States finished second in the team standings behind Russia. Azerbaijan came in third, followed by Iran and Japan.