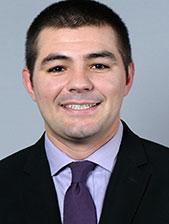 MOUNT VERNON – After one season as interim coach, Brent Hamm has been named head coach of Cornell College’s storied wrestling program, it was announced Tuesday by Director of Athletics Keith Hackett.

A 2015 Cornell graduate and Iowa City native, Hamm has been a vital part of Cornell’s wrestling program the past eight years. He was a four-year starter and two-time NCAA qualifier under the late Hall of Fame Coach Mike Duroe. Hamm spent three seasons in the coaching corner with Duroe before taking on head interim duties this past campaign.

“Over the past 17 months, I have watched Brenton Hamm continue to grow and mature as our interim head wrestling coach,” Hackett said. “Following a legendary coach like Mike Duroe is no easy task. Brenton has handled the challenges with poise and character through the entire process. There is no question he has what it takes to move the program forward and back to where we all want it to be.”

The Rams fielded three NWCA Scholar All-Americans and were named an NWCA All-Academic Team this past season under Hamm. The young squad won the Cliff Keen-Mike Duroe Invitational in January and had three placewinners at the Lower Midwest Region Championships.

“As a Cornell alum, I am honored to have the opportunity to continue to lead the program that has done so much for me,” Hamm said. “We have a great group of student-athletes and I am very excited for the future.”

Hamm was the team’s lead assistant for the 2017-18 season, when the Rams crowned three all-Americans and placed 17th at the NCAA Division III Championships.

“Brenton was chosen by Coach Duroe to be his top assistant because of the skill, character and work ethic he displayed during his time as a student-athlete and member of the coaching staff,” Hackett added. “Brenton’s desire to excel makes him an excellent fit to carry on the long and successful tradition of Cornell Wrestling.”

Hamm received a strong endorsement from former Cornell coach Steve DeVries, a Hall of Famer who won 130 duals and 10 Midwest Conference championships with the Rams from 1982-2000. DeVries was a part-time assistant on the 2018-19 staff.

“I’m happy to see Brent is going to be staying with us,” DeVries said. “He is a real student of wrestling and continues to learn about the sport. He takes it very seriously, has strong self-discipline and a great work ethic.

“For as young as he is, Brent has a good handle for discipline and communicating expectations to student-athletes. Brent’s had more put on his plate than is typical for a young coach and he’s responded very well.”

As a wrestler on the Hilltop, Hamm recorded 90 victories from 2011-15. The two-time team captain qualified for the NCAA Championships at 174 pounds in 2014 and 2015. A four-time regional placewinner, Hamm captured the Central Region title in 2015. Hamm is Cornell’s last region champion.

Hamm also excelled in the class room, earning three NWCA Scholar All-America awards as a student-athlete. A member of the Dean’s List, Hamm received team Most Dedicated, Most Improved and Most Valuable awards. He earned a bachelor’s degree from Cornell in exercise science.

Hamm was head coach of Lisbon Matpack Wrestling Club from 2015-17.

Cornell’s wrestling program has earned nine Top 20 national team finishes since 2007. The Rams have crowned 21 all-Americans during that period.