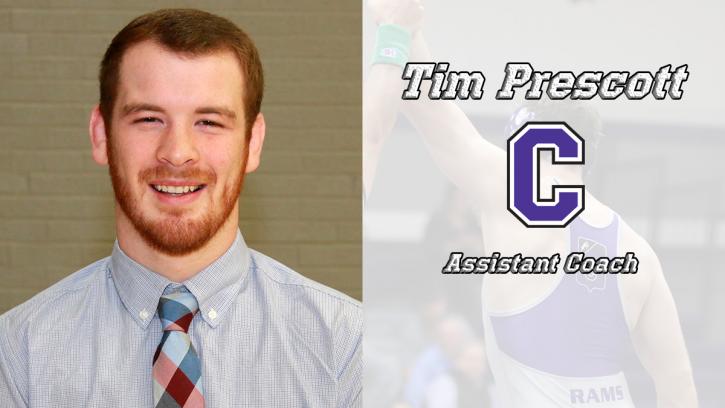 “We are excited to welcome Coach Prescott in our wrestling program,” said Hamm, entering his second season as head coach. “Tim has been a national champion and part of championship teams. He’s been highly successful because of his work ethic and discipline, which make him a great fit for our program.

“Tim won’t settle for anything but the best and he can help us get to the top. He’s extremely motivated and passionate about wrestling, but more importantly, understands the impact we have on student-athletes.”

Prescott wrestled two years at Neosho County (Kan.) Community College. The McPherson, Kan., native placed fifth at the NJCAA Championships at 125 pounds in 2013 and 2014. Prescott helped lead the 2014 team to an eighth-place finish at nationals.

Prescott finished his competitive career with two strong seasons at St. Cloud State (Minn.) University, where he earned a bachelor’s degree in liberal studies with an emphasis in recreation & sport management/education in 2017.

As a junior at St. Cloud State, Prescott was crowned 2015 NCAA Division II champion at 125 pounds. That season, he was tabbed Northern Sun Intercollegiate Conference Wrestler of the Year. Prescott was the nation’s top-ranked wrestler at his weight for most of his senior campaign, enduring only two losses.

Prescott guided St. Cloud State to back-to-back NCAA team titles in 2015 and 2016. It marked the school’s first national championships in any team sport.

A three-time academic all-American, Prescott was part of a turnaround effort as assistant coach at Northern State. In his second year there, the Wolves posted their first winning season in a decade and earned a Top-25 national ranking with five freshmen in the lineup.

Prescott received his master’s degree from Northern State in sports performance and leadership in May 2019.