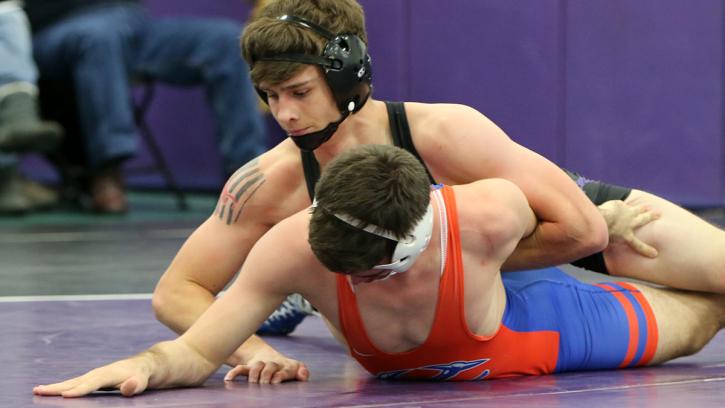 INDIANOLA – Cornell's wrestling team racked up big points in the middle of the lineup and continued its dominance over Simpson with a 29-12 dual win Thursday night in Hopper Gymnasium.

The Rams (1-1) won seven of the 10 matches and recorded their 16th consecutive series victory over the Storm (0-1).

The meet was tied 6-6 after three bouts when Cornell 149-pounder Klayton Keller (SO/Des Moines, Iowa) started a stretch of bonus-point wins that put the Rams in control. Keller took down Jakob Slavin in the opening minute and then sent Slavin to his back for a quick pin in 58 seconds.

After Simpson drew within 12-9, the Rams broke the meet open with back-to-back technical falls from Nic Jarvis (SR/Iowa City, Iowa) at 165 and John Engelbrecht (SR/Mount Vernon, Iowa) at 174. Jarvis piled up nine first-period points in his 22-7 victory over Dalton Cockman.

Engelbrecht built more than five minutes of riding time in his 18-3 rout of Nicholas Blasko. He scored half of his points in the final period, giving the Rams a 22-9 team advantage.

Cornell 184-pounder Bryce Oveson (JR/Wilton, Iowa) sealed the meet with a 12-4 major decision over Shyler Langley. Kendale McCoy (SR/Oak Park, Ill.) continued the team's roll with a 3-2 decision at 197 over Sam Mathis, scoring the winning takedown with 47 seconds remaining in the match.

Coming up – The Rams travel to Decorah Nov. 16 for the Luther Open. Matches begin at 9 a.m.