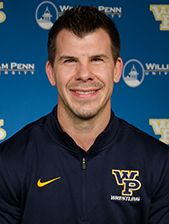 A plethora of redshirted grapplers will hit the mat to bolster the William Penn men’s wrestling team as it readies for the 2019-2020 campaign.

Aron Scott is in his third year as head man of the program, leading the navy and gold to a 3-5 dual record last year and a sixth-place finish at the Heart of America Athletic Conference Championships.  Unfortunately, no one qualified for nationals, but Scott believes several grapplers are in the running to get to the final tournament of the year.

Nadhelo Charles-Pierre (Jr., Miramar, Fla., Sports Management) will once again lead WPU at the sport’s lowest weight.  He was 4-14 with one fall a year ago and placed fifth at the Heart Championships.

Kirkland Crocker (Sr., Tampa, Fla.), who redshirted last season, will give Charles-Pierre a push.  He very well could wrestle up a class, though, trying his luck at 133.

Pierre will start the campaign ranked 18th nationally and fifth in the Heart.  He owned a 10-9 record as a junior.

The coaching staff originally debated to redshirt him, but freshman Preston Wiest (Troutsville, Va.) has been so impressive in preseason practices that he will be given the green light to compete right away.

Joe Eads (So., Morrison, Ill., Biology) is back on the mat after dealing with a rash of injuries over the past year.  A ‘pinner’ by nature, Eads was 10-11 two years ago with six falls to his credit.

Dennis Simmons (Sr., Tucson, Ariz., Sociology) has again netted a position in the lineup, holding the spot at 157 pounds.  The senior was 4-13 with one fall last campaign.

Mekhi White (Fr., Aurora, Ill.) and Darwin Diaz (Fr., Pembroke Pines, Fla., Sociology) will both remove their redshirt tags and are ready for competition this winter.  White earns the nod at 165, while Diaz is slotted at 174.

Jason Beebe (So., Oskaloosa, Iowa, Business Management) returns to action as well after redshirting during the 2018-2019 season.  Two years ago as a freshman, Beebe was 5-17 with three pins.

Joining the crew of 2018-2019 redshirts is Matthew Landsperger (Fr., Knoxville, Iowa, Sociology), who is slated to start at 197 pounds.  His spot is far from secure, though, as he will receive a fierce battle after the holiday break from last year’s  starter Sheldon Rodriguez (Sr., Tampa, Fla., Biology).  Rodriguez was 7-10 with three falls last season.

Maxwell Diaz (Fr., Miami, Fla.) brings a great deal of junior experience to WPU and is ready to post a big freshman campaign.

William Penn’s season begins Thursday with a road dual meet against Central, while the team’s first tournament is November 16 at the Grand View Open.  The Statesmen will be at home five times this season, all in dual competition.

The regular season will culminate on February 22 as Benedictine hosts the national-qualifying Heart Championships.