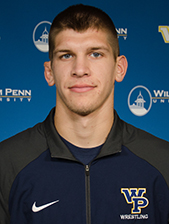 Pella--The Statesmen men’s wrestling team went west to Marion County for the second time this season as it competed in the Central Under Armour Invitational Saturday.

William Penn placed ninth out of 12 teams with 23 points, while host Central won the event with 112 points.

Joe Eads (So., Morrison, Ill., Biology) spearheaded the navy and gold, finishing third at 149 pounds.  The sophomore won his first two matches, including avenging an early-week loss to Trey Heckadon of Graceland, beating the Yellowjacket 8-2 in his first matchup of the day.  He then claimed a major-decision win before falling in the semifinals.  Eads concluded Saturday with a 3-1 record, pinning his foe to take third place.

133-pounder Darquell Pierre (Sr., St. Petersburg, Fla., Sociology) opened his day the same way as Eads by claiming victory in his first two bouts.  Unfortunately, he also lost his semifinal match before succumbing in the third-place contest to finish fourth with a 2-2 mark.

Next Up: William Penn returns to Oskaloosa next Tuesday, hosting Benedictine in a Heart of America Athletic Conference dual meet at 7 p.m.