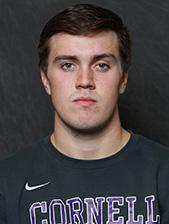 DUBUQUE – Junior 197-pounder Trevor Trende (JR/Cresco, Iowa) recorded a pair of first-period pins – including the clincher against Concordia (Wis.) – as the Rams split two wrestling meets at the University of Dubuque Duals Saturday.

Cornell (3-4) registered four falls in a 30-17 victory over Concordia to start the day. The Rams then dropped a 36-12 dual to the host Spartans.

The Rams won three of the final four matches to take the meet with Concordia (4-1), handing the Falcons their first dual defeat of the season. Cornell led 15-14 when John Marsh (JR/Denver, Colo.) (13-7) stretched the Rams' lead with a pin in 1:15 over Alex Montbriand at 174 pounds.

Bryce Oveson (JR/Wilton, Iowa) (14-2) earned a 7-4 decision over Merrick Odonald at 184, and then Trende sealed the team win for Cornell with a quick fall in 1:51 over Charles Himdley.

Oveson beat Delmontae Davis, 3-1, in the 184-pound match to complete a perfect 2-0 day in his return to Cornell's lineup. Trende finished an impressive performance by pinning Terrin Rackouski in 2:22 at 197.

Allen lost 5-2 to Jessy Diaz in a tight match at 157. The Spartans scored bonus points in six of their seven wins in the dual.

Coming up – Cornell hosts the annual Cliff Keen-Mike Duroe Invitational Saturday, Jan. 18, in the arena of the Small Multi-Sport Center. Action gets underway at 9 a.m.