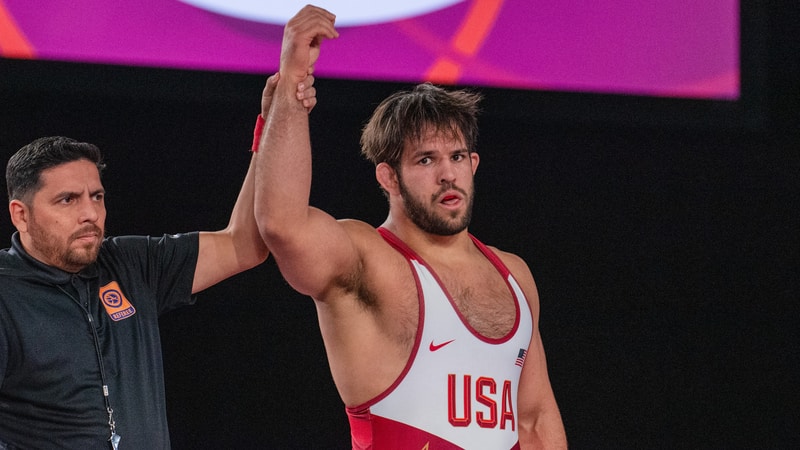 For the most part, the United States buried opponents Sunday under an avalanche of takedowns and turns on what turned out to be a near-perfect freestyle mission for the Americans at the Pan Am Olympic Qualifier.

Thomas Gilman wore down two-time U23 World champion Reineri Andreu Ortega of Cuba and tore through a couple more opponents on his way to winning the gold at 57 kilograms. David Taylor punctuated his return to competition with two dominant performances against stingy opponents en route to the title at 86 kilos. Nick Gwiazdowski registered two shutout technical superiority wins during his run to gold at 125 kilograms.

Zain Retherford was on his way, too — until a stunning turn of events left the Americans facing one last chance to qualify the 65-kilogram weight class for Tokyo.

Retherford scored a takedown 30 seconds into his semifinal match against Argentina’s Agustin Destribats was transitioned into a leg lace when he lost his lock and got reversed to his back for a fall. Destribats is just the fourth Argentinian to qualify for the Olympics in men’s freestyle and the first since 1996.

The United States, on the other hand, must now qualify a 65-kilogram participant through the World Olympic Qualifier, which was originally scheduled to begin April 30 but has since been postponed due to the COVID-19 pandemic. The U.S. has failed to qualify a weight class for the Olympics only once — 60 kilograms in 2008 — but Mike Zadick was added to the field that year as an alternate.

“Of course, I’m disappointed for Zain because he feels bad, I’m disappointed because we didn’t get the weight qualified, but given the situation, I think we’re about 30 seconds away from tech falling that guy,” USA Wrestling men’s freestyle coach Bill Zadick said. “We’ll look at it and see. Maybe we just got a little too greedy in a position or just got caught. I was talking to some of our other staff and sometimes you can pin people you can’t beat. Maybe Zain was in a unique situation, but I’m no less proud of him.”

Gilman did his part at 57 kilograms, registering a pair of technical superiority wins, along with a 4-3 victory in a quarterfinal slugfest against the Cuban. The 2017 World silver medalist went ahead on a kneetap midway through the second period and shut down Andreu the rest of the way.

In his first competition since sustaining a knee injury that shelved him for much of 2019, Taylor posted a 10-0 win against Venezuela’s Pedro Ceballos Fuentes, who placed fifth at the 2016 Olympics, and he notched an 8-0 victory against Cuba’s Yurieski Torreblanca Queralta, who won gold at the Pan Am Games last year.

“I feel great,” Taylor said. “It’s been one of the more unique battles of my life getting back to this point, but I told Bill a long time ago: ‘I want the opportunity to control my own destiny. I want to be able to come up here and qualify.’ This has been circled as my time to be back. I don’t know if the path went exactly as I thought it would go, but I’m here and I thought I wrestled pretty solid. These guys are tough and in this event is everything to these guys. This is the Olympics for a lot of these countries and I can feel the difference in the way they’re wrestling.”

Gwiazdowski spent less than three minutes on the mat Sunday on his way to the finals at 125 kilograms.

“Happy we’ll be going to the Olympics,” Gwiazdowski said, “and I’ll be happier when it’s decided that I’m the guy.”

The United States finished the weekend with 15 weight classes qualified for Tokyo — all six in women’s freestyle, five in men’s freestyle and four inm Greco-Roman.

“We got three through,” Bill Zadick said. “It was a big step for our team, our country and for those individuals. It helps them continue to build confidence. We had some great victories out there today. Really proud of their effort and the direction they continue to go as individuals and move our country.”