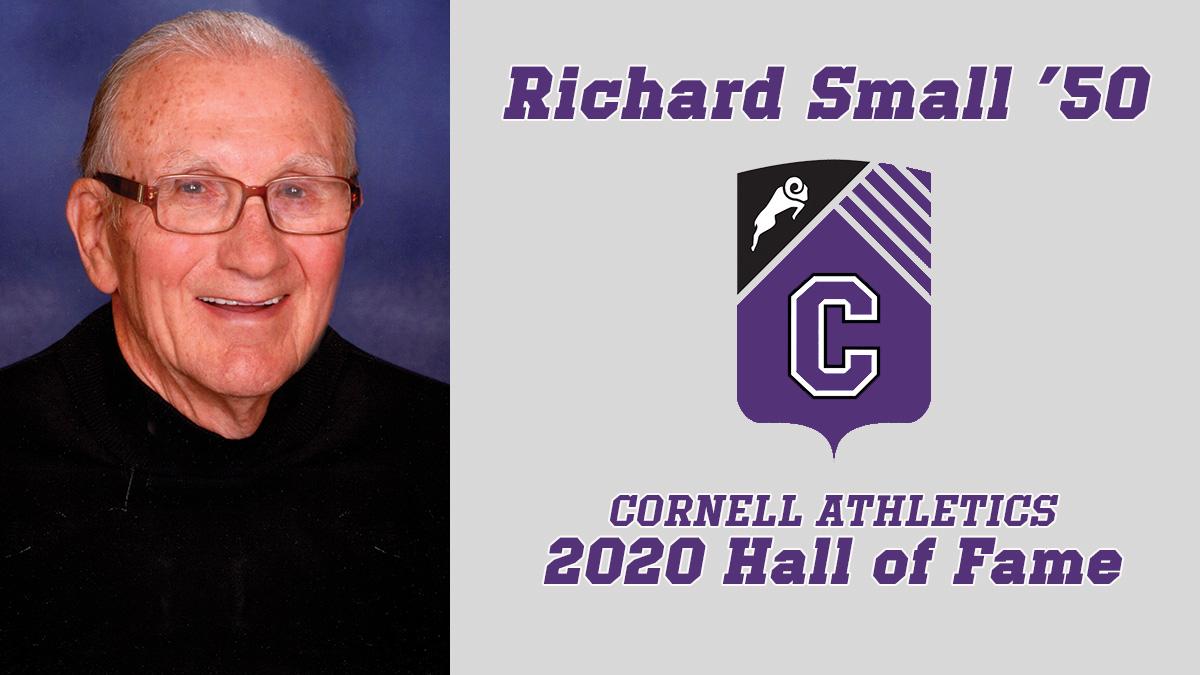 MOUNT VERNON – Richard Small '50, a Midwest Conference wrestling champion and philanthropic icon, will be enshrined in Cornell's Athletics Hall of Fame with a virtual ceremony at 11 a.m. Saturday, Oct. 3 during Homecoming Weekend.

The induction will be streamed live on the Cornell College Rams Athletics Facebook page.

Small was a freshman wrestler on Cornell's acclaimed 1947 Dream Team that won both NCAA and AAU national championships, the only private school to achieve the feat. Cornell's 1947 squad, coached by the legendary Paul K. Scott, became the first team honored by the National Wrestling Hall of Fame.

Although not a starter on the historic 1947 team, Small developed into an MWC champion, winning the title at 165 pounds in 1949. Small proudly acknowledges that to be his greatest lifetime accomplishment.

Small and his wife, honorary alumna Norma Thomas Small, are giants in Cornell College's history who have made a widespread and lasting impact on campus through leadership and philanthropy. Richard built a successful oil-marketing business, Cheker Oil Company, that expanded to a network of more than 200 stations in 18 states.

Small provided leadership to the Society of Independent Gasoline Marketers and the Midwest Petroleum Marketers Association, and served as a director of several banks. In 1984, he began a career as chairman and majority stockholder of Tri-Star Aerospace, Inc. After selling Tri-Star in 1996, he became active in oil and gas exploration in Texas.

Small served on the Cornell College Board of Trustees (1971-81, 1986-99), chaired the Board from 1993-96, and remains active today as a Life Trustee. In 2000, Small received both the honorary degree Doctor of Humanities from Cornell and the United Methodist Higher Education Foundation's Stanley S. Kresge Award for unselfish support of United Methodist higher education.

The Smalls' philanthropy to Cornell includes a $20 million challenge gift in the 1980s and contributions to virtually every major college priority over the past four decades. They've supported numerous capital projects on campus, including the Richard and Norma Small Sport Center and the Thomas Commons renovation and expansion.

Richard and Norma have provided millions for Cornell's endowment, including the Small Distinguished Professorship and the Small-Thomas Lecture Series.