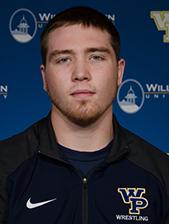 Oskaloosa--The Statesmen men’s wrestling squad took to the mat for the first time in over a month, facing off with two Heart of America Athletic Conference foes in dual-meet action Tuesday.

Competing at home for the first time this season, the navy and gold dispatched the under-manned Warriors (0-2, 0-2 Heart) with ease, including recording four falls.

WU then knotted it up at 133 before Darian Diaz (Fr., Pembroke Pines, Fla., Sociology) gave his team the lead for good with a forfeit at 141 pounds.

The remainder of the match was all William Penn, beginning with 149-pounder Joe Eads (Jr., Morrison, Ill., Biology) pinning Itai-Hod-Tuszynski in only 53 seconds. 157-pounder Cameron Hargrove (Fr., Bolingbrook, Ill., Undecided) thoroughly dominated Anthony Salvo to the tune of an 18-2 technical fall to make it 20-3.

“I thought our guys wrestled really well against Waldorf,” Head Coach Aron Scott said. “We were aggressive and pushed to get a lot of bonus-point wins.”

The Yellowjackets (6-1, 2-1 Heart) were a much different opponent unfortunately, jumping out to a 12-0 advantage after the first two weights.

Diaz then turned the tide a bit by holding off Zack Wicks 3-2. Eads had some early trouble with Colby Wilken, but figured it out quickly to post a fall in a time of 1:51.

Following a setback at 165 pounds, Stanley wrestled up two weights and posted a pin of Mark Leija in 2:26.

Bottorff allowed the Statesmen to have the last laugh, however, as he rallied and eventually pinned #14 Dalton Sell in 4:14.

“Although we lost, I think we showed we are making up ground on the top teams,” Scott said. “Had a few moments gone our way, it could have been a different story. It is always tough coming out of break, but our guys wrestled well and we look forward to improving our next time out.”

Next Up: William Penn travels to Atchison, Kan. next Tuesday to face Benedictine in a Heart dual at 7 p.m.