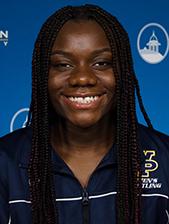 Selemani, competing at 123 pounds, opened her day with a 6-0 decision over Davonia Bonner of Central Methodist and then pinned Gionvanna Loza, also of CMU, in a time of 3:30 to claim the crown.  She is the first conference champion in program history.

101-pounder Chalimar Rodriguez (Fr., Keller, Texas) and 155-pounder Salima Omari (Fr., Iowa City, Iowa) both finished just shy of joining Selemani at the top of the podium.  Rodriguez, who had just two grapplers in her bracket, lost by technical fall, while Omari was nipped 11-10 by Morgan Mayginnes of Baker.

Omari dominated her first two foes to get to the title bout, dropping Brooke-Lynn Rush of Missouri Valley via a 12-0 technical fall, while also pinning Berenice Espino of Waldorf in 1:45.

As a team, the Statesmen finished fourth out of six teams with 43.5 points.  Grand View won the team crown with 100 points, edging out Baker and its 96 points.

Next Up: William Penn is off three weeks before concluding its season by competing in the NAIA Invitational on March 12 in Jamestown, N.D.